I’m a self produced artist and songwriter. I have released two EP’s Promise me and So this is our Dance. Human is my third EP which will be released early 2019. The first two EP’s have been produced and recorded by Ian Wallman. Human was recorded and produced by Indi Brodley in the Barn Studio, Oxfordshire.

July 2016
Singer and guitarist for Nine Songs for Nine Elms, directed by Artist Lucy Cash and composer Fraya Thomsen. Nine Songs for nine Elms is a film and performance co-created with local community groups, schools and residents’ associations and explores the shifting landscapes of the Nine Elms development area through lyrics and songs dedicated to the land and soil which hold the history of the area.
Nine Songs for nine elms

September 2015
Performer at BEFSA Ten Year anniversary at Oxford Museum. BEFSA is a charity set up to provide Education in South Africa in the rural and township areas.

July 2014
Singer and Songwriter as part of the Basement Jaxx- Power to the People collaboration which formed part of a World Peace Charity EP raising money for projects around the world supporting Peace. PowertothePeople.fm was a Basement Jaxx song collaboration with the whole world, connecting music makers, artists, dancers and film makers.

I regularly perform at weddings and charity functions singing my own material and cover versions ranging from Bruno Mars to Adele and the Guilletmots. 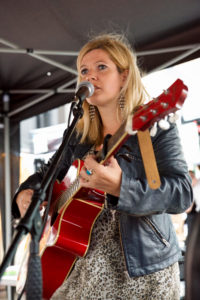 The Folk Show on Radio Warwickshire

Check out my YouTube channel to view more performances