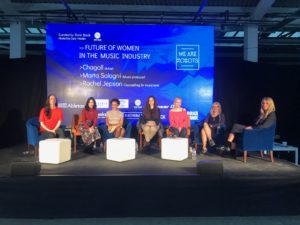 Industry professionals gathered at the inaugural We Are Robots music conference to discuss the ‘Future of Women in the Music Industry’, with a particular focus on the electronic music sector. The panel saw artist, Chagall, Susie B of Help Musicians UK, Dr Mariana Lopez, Rachel Jepson from Counselling for Musicians, Stefania Pavlou representing PRS for Music, and music engineer and producer, Marta Salogni, come together to share their own experiences and provide guidance and advice to those working their way up, or seeking a career in the music business.

We Are Robots, an innovative new music festival curated in collaboration with Rough Trade, explored ideas and movements propelling the future of music, with some of the biggest names in the music industry.

Singer-songwriter, performer and electronic music producer, Chagall, known for her early adoption of the mi.mu gloves interface and interactive audio-visual live sets, spoke openly: “I do feel very confident now as a music producer but five years ago I didn’t. I really thought I needed a guy to produce my music for me and that I could only sing. I’m over that now…There are so many more women making electronic music and I think that’s really positive and encouraging. It’s also great that it’s no longer considered ‘good music’ because it’s made by a woman – it’s just good because it’s good music.”

Dr Mariana Lopez, lecturer and Vice Chair of the UK Audio Engineering Society (AES): “Gender equality is often talked about as something that benefits women, but actually it benefits everyone – it benefits men as well.

She added: “We ask our AES members in the UK to sign our United Nations HeForShe pledge for gender equality as we’re aspiring to become thematic champions for audio. It’s a first step. I hear so many people in private tell me how much they support gender equality, but they don’t speak up when it’s their turn. If we don’t all start speaking up when we see inequality we’re just as bad as the people making those comments. I felt like I couldn’t speak up. Now, I hear something that I don’t agree with and I think it’s my moral responsibility to say actually, that wasn’t appropriate. If we all work together, both men and women, to do it, we can make the industry so so much better.”

A study carried out by the UK Music Diversity Taskforce into gender inequality in the music industry workforce, published earlier this year, found that, at entry level, women slightly outnumber men in the music business. This is reduced at managerial level where males are more dominant at 52%. As seniority in the workforce increases, the number of women decreases; at senior exec level there are more than double the number of men compared to women. This is also reflected in age demographic where women between the age of 45 and 64 represent only 33% of the music industry workforce. This is halved to just 16% of women taking up posts beyond 64 years of age.

Music Producers Guild Breakthrough Engineer of The Year nominee, Marta Salogni (Bjork, The xx, Kelela, Goldfrapp), noted: “Not having role models definitely doesn’t help bring more women into the industry and by changing that it will change the strength that some of the women starting out in the industry have psychologically. When I started getting into engineering when I was 16, it was very hard for me to look up to someone who wasn’t a man because it was very hard to find a woman who was doing the job that I wanted to do.”

There are many targeted initiatives that have materialised in the past few years to help support and encourage women in this industry, from shesaid.so and Let’s Be the Change initiating global databases of female professionals, to the Association of Independent Music offering free masterclasses on public speaking, building confidence and mentoring, Music Week providing a platform to champion standout careers with its Women in Music Awards, and PRS Foundation providing support and funding schemes such as Women Make Music, ReBalance and Keychange, all of which take positive action to address gender imbalance.

Stefania Pavlou, PRS for Music: “Change needs to be led by the bigger organisations, the trade bodies, the charities, publishers, labels and music press that have sway and influence in order to help the wider industry. We need to lead by example, provide positive role models, open doorways and be better at creating an inclusive environment – whether that’s through evolution or revolution will be determined by people at the top and their willingness to adopt, encourage and inspire change. We know that there are some incredible female songwriters and composers out there, yet only 17% of PRS for Music’s membership identify as women. Today, 39% of new PRS members joining, who are under the age of 20, are female – this is good news for the industry, there is still a long way to go but we are starting to see a move in the right direction.”

The We Are Robots ‘Future of Women in the Music Industry’ panel was created and moderated by Carly Horden, Point Blank Music School.

About We Are Robots
We Are Robots is an innovative and new music conference, curated with the consideration of future global music scenes, aimed at exploring the ideas and movements that are propelling the future of music. Whether you’re a music maker, industry insider or a music fan, experience first-hand the new technology in music creation; discuss and attend talks about current and future practices; learn how to hone your skills through innovation workshops with leading brands and immerse yourself within and interact with installations that challenge the senses, and enjoy our impressive line-up of live musical performances.

PRS Foundation
Chagall is a participant of PRS Foundation’s new Keychange fund, a new European project which celebrates and invests in the talent of female music creators and innovators who will be driving the future success of the music industry. For more information visit: www.prsfoundation.com

This article was written by susie